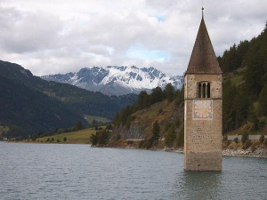 In 1909 and 1910, Claude Debussy wrote a series of 12 preludes for solo piano. Among them is the mysteriously titled, “La Cathédrale engloutie” which translates to The Submerged (or The Sunken) Cathedral. A quintessential example of musical impressionism, the piece depicts the rise of a cathedral from the water and subsequent return to the depths – complete with bells chiming, priests chanting, and organ playing.

While you may know the piece, did you know that it’s based on a real legend? The ancient Breton legend of Ys.

Ys was a mythical city said to have been on the coast of Brittany (Northwest France) in the Bay of Douarnenez. It was famous throughout the region for its beautiful gardens and buildings. Run by a king named Gradlon (or Gralon) who lived in a palace of marble, cedar, and gold, it was rich in commerce and the arts. It was also very vulnerable to flooding, being situated below sea level. To protect the city, a huge dike was built around it with a single gate that opened for ships during low tide.

The exact reason why Ys became submerged in the sea varies. There are many different versions of the legend. Most depict Gradlon as a pious, devoted king and father who was the holder of the only key to the city gate. His daughter, Dahut, on the other hand is usually described as a sinful, deceitful princess. In some versions, Princess Dahut holds a secret banquet for her lover and the two, drunk with wine, steal the key from her father and open the gates, letting the waters flood in. Another version says that Dahut steals the key to let her secret lover in to the city during the night, mistakenly flooding the city. 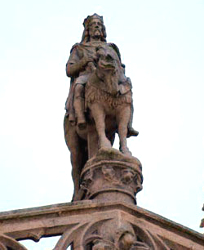 There are also versions that involve the fight between Christianity and paganism, suggesting the cause of the city’s demise was due to everything from excessive luxury to sin and worship of pagan gods to Dahut taking the devil himself as her lover. In these versions, King Gradlon was said to have converted to Christianity. St Gwénnolé foretold of the city’s downfall and warned the king to flee. He agreed to do so, but devoted father as he was, he tried to save his daughter. A voice called out to throw his sinful daughter into the sea or he would not escape the waters that were about to overtake him. He does so and she turns into a mermaid.

All versions agree that Dahut does not escape her fate. Ys becomes submerged in the sea. King Gradlon escapes and takes refuge in Quimper which becomes the new capital. Interestingly, a statue of Gradlon still stands between the spires of the Cathedral of Saint Corentin in Quimper.

Breton folklore asserts that the bells of the churches of Ys can still be heard below the waters of the Bay of Douarnenez when it is calm, hence the inspiration for Debussy’s prelude.

A Pun For An Ending

Another related legend says that when Paris is swallowed, the city of Ys will rise again. Par-is means “like Ys” in Breton.

The opening of the piece gently brings in the cathedral, out of the water, with a melody that resembles waves. Debussy wrote in Peu à peu sortant de la brume (Emerging from the fog little by little). Then after a section marked Augmentez progressivement (Slowly growing), the cathedral emerges and the grand organ is heard with a powerful fortissimo. This is the loudest part of the piece. The cathedral then sinks back down into the ocean and the organ is heard once more, but this time from under water. Finally, it is out of sight and only the bells are heard at a distant pianissimo.

Hear It For Yourself!

Join us on October 27, 2017 and hear us perform Stokowski’s arrangement of Debussy’s La Cathédrale engloutie along with other pieces perfect for the Halloween season. Tickets for “Sounds of the Deep” are available now.