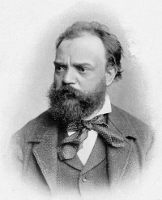 You may know Antonín Dvořák as the composer of the much-loved and often-played Symphony No.9 ‘From the New World’ (aka the New World Symphony), but there is more to the man than just his most famous work. Although his time in America is well-known thanks to the aforementioned symphony, he was actually born in a small village north of Prague and was very passionate about his homeland and its music, infusing the sounds in pieces like his Slavonic Dances.

Here are 10 others things you may not know about Dvořák.

1. He Apprenticed As a Butcher: Dvořák was the oldest of 14 children (8 who survived infancy). His father was a zither player, an innkeeper, and also a butcher. A young Antonin not only joined his father in the local band, but also in his business as an apprentice butcher. At the age of 13, he was inducted into the Butcher’s Guild of Zlonice.

2. His Grandmother Had a Pet Name For Him: Dvořák’s grandmother called him, “my little toothy” because he apparently had good teeth.

3. His First Compositions Went Unnoticed: Dvořák’s first compositions received no critical reception and no public performance. In fact, it wasn’t until Johannes Brahms’ efforts to boost his career that any of his music began to attract interest. It is said that Dvořák was so critical of himself that he burned his early works.

4. Sheet Music For The First Slavonic Dances Sold Out: In 1874, Brahms sat on a jury to award financial support to talented composers in need. It is then that he encountered Dvořák and was “visibly overcome” by his “mastery and talent”. Brahms recommended that his publisher, Simrock, publish a set of Slavonic Dances for piano duet. The sheet music for the 8 dances sold out in one day.

5. Dvořák Loved Trains: The composer was known to spend hours at the Franz Josef railway station in Prague, watching trains. He knew the timetable by heart and even asked his students to describe train journeys they had made. Later, when he visited America, he also took up pigeon raising and watching steamboats.

6. He Stole Pencils: In an effort to help calm Czech speakers in Austria who were upset over the banning of their language, Dvořák was appointed a member of the Austrian Senate. He came the first day in 1901, accepted the honor, stole all of the pencils at his desk because they were perfect for composing, and never showed up again.

7. He Was An Early Riser: Dvořák and his wife got up very early in the morning. When they stayed in Cambridge with composer and organist Charles Villiers Stanford, the host was surprised to find couple sitting under a tree in the garden at 6 AM.

8. A Ship Is Named For Dvořák: In 1943, an American Liberty ship in the U.S. Navy was named the USNS Antonín Dvořák in the composer’s honor.

9. There Is A Mural In His Honor In Iowa: Dvořák spent a few weeks living in Spillville, IA. It was a town of mostly Czech speaking immigrants at the time. It is there that he wrote his “American” String Quartet. Today, a mural is there in his honor.

10. He Is The Second Czech Composer To Achieve Worldwide Recognition: Dvořák is not the only Czech composer of note. Bedřich Smetana, of Má vlast and its The Moldau movement fame, first established a nationalist example during the 1848 Prague uprising.

Be sure to join us to hear Dvorak’s “The Water Goblin” at our “Sounds of the Deep” concert, Friday October 27 at 7:30 PM at the PACE Center in Parker, CO.

Ippolitov-Ivanov: A Classical One Hit Wonder